I have been asked to reply to the report on the link below.

Whilst I will of  course do this, I feel strongly that I should put forward the views of the park home residents that it will ultimately affect.

If you have read the lengthy report below, that was sent to Government,  and have a strong view on its content.  May I ask that you please email it to Sonia at phojc1sm@gmail.com

Your replies will be treated with strict anonymity and no names - only the content - will be included in the response that I send.

When sent, I will post my response on the Justice Campaign web site. FB pages and database.

Best wishes and thank you

We have had some issues and we cannot add items to the website as it was.

PETITION TO THE HOUSE OF COMMONS

In the big water charge `Rip-Off`, where negligent park owners pass on the costs of their own used or wasted water and are slow to respond to sometimes huge leakages, our petition is now live.
It will be presented to the House of Commons by Sheryll Murray MP ( East Cornwall ) and is likely to be well backed by others
The wording of the petition, which asks the House of Commons to support the free installation of water meters for ALL residential Park Homes on protected sites, has been approved by the Commons Petitions office and will need the active support of ALL park home residents, whether already metered or not.
Water companies already provide meters free of charge to mainstream housing and there is usually no reason for them to decline installations on Park Home estates, other than the avoidances of costs that benefit their own shareholders, whilst governments have a responsibility to ensure that everyone is treated equally.
Hopefully, in due course, this move will bring a halt to the forms of practices pursued by major operators such as Wyldecrest Parks, who have been passing on their own wasted water costs to their unmetered residents in sums of up to £130 per week ( that`s right £130 ! ) Other operators also pass on their own costs, where the OFWAT regulations remain open to obvious abuses they have themselves failed to address.
GO TO PETITION VIA THE FOLLOWING LINK >
https://www.parkhomespolicyforum.co.uk/
£400 REBATE UPDATE
There is much concern and stories are circulating that park home residents will not get this payment.  This has been brought about because the Chancellor said that every household would get the £400 grant.  However he failed to say that park home owners would not get it because they did not have an individual electricity account.
Feelings are of course understandably high - and so they should be  - but please be patient and wait for the Government's announcement because they are fully aware.
Sir Peter Bottomley MP, the Father of the House and President of the Park Home Owners JUSTICE Campaign is strenuously behind you and has been in contact with the Secretary of State; as have many MPs.  I know I will hear from him direct with any reply and that will be passed to you immediately.
However, It does no harm for you to keep the pressure on and lobby your MP to add his/her voice.
In addition, on BBC Morning Live today. They were discussing the energy support measures and said a spokesman from the Government said they are aware of the issue for park home owners and are looking at other ways of getting the payment to us.
A further report is expected in late summer.
This payment is not due until October, so we have plenty of time.  I am sure a solution will be found - but if not, I hope you will agree, then is the time to raise our voices and do something very constructive to force change - and the Park Home Owners JUSTICE Campaign will be fully behind it.
This whole situation is a national disgrace.  Park Home Owners have the same rights as home-owners in bricks and mortar.  But as usual, it was not thought through and no one could blame any park home resident for feeling  they are treated like second class citizens.  But your day will come.  There is strength in numbers and as mentioned above, may I ask you to bombard your MP with letters requesting them to bring this up in the house.  Perhaps also remind them that in the not too distant future they will want your vote. Along with the support that we already have, we can leave no stone unturned.  This affects us all and we will get JUSTICE - on this front and in changing RPI to CPI on our pitch fee increase.  So please continue to do your bit.
Best wishes and many thanks from Sonia
Minister, Michael Gove admits to receiving your letters.
Sir Peter Bottomly MP informs the Rt Hon. Michael Gove of Park Home Problems.  YOU WILL NOTE THE REPLY FROM MR. GOVE WHEN HE ADMITS THAT HIS DEPARTMENT HAS RECEIVED HUNDREDS, IF NOT THOUSANDS OF YOUR LETTERS.
Well done to you all for sending your letters regarding RPI to CPI.  It has been noticed.
https://www.facebook.com/sirpeterbottomleyofficial/videos/718310132740033
Please see attached letter from our President, Sir Peter Bottomley MP; sent to the Secretary of State for Energy the Rt Hon Kwasi Kwarteng MP.  Secretary of State Rt Hon Michael Gove MP and the Chancellor Rt Hon Rishi Sunak MP today regarding park homes.
I will post any replies that are received.

I write in connection with Government’s Energy Bills Support Scheme (the grant) announced by the Chancellor on 3rd February to help domestic energy customers with the cost of rising energy bills and the inclusion of park home households in the scheme.

I note the consultation on the technical proposals for the grant concluded on 23rd May and presently your department is analysing replies with Government’s response expected later this summer.

You will agree, park home residents are among the poorest and most vulnerable in society and as energy consumers need urgent financial help and support to meet their household energy costs, in line with non-park home households.

Government recognises that households without an individually assigned energy account do not benefit from the same consumer protections as households with one.

I ask that this anomaly be addressed as your department works assiduously to develop secure mechanisms for the distribution of the grant that will include park home households.

Contrary to Government’s intended purpose for the grant, according to founder of the Park Home Owners Justice Campaign Sonia McColl OBE, ‘many park home residents are concerned that site owners, who are invariably the energy account holder on behalf of park home residents will either receive the grant in their personal capacity, or not pass the grant in full to each park home household’.

Where this is the case, I trust your department will ensure park home households will benefit fully from the scheme.

By way of a comparable, park home households rightly benefitted from the Warm Home Discount that was strongly supported by the former Minister of State for Energy, Baroness Neville-Rolfe who you will recall said:

‘It’s great news that this scheme is now accessible to a broader range of people, which isan important part of our work to support low income and vulnerable households’.

As a minority group, park home residents must not be forgotten.

Father of the House

Vice-chair of the All-Party Parliamentary Group for Park Homes

ANOTHER MP SUPPORTS THE Park Home Owners JUSTICE Campaign's call for the £400 grant to be given to ALL PARK HOME RESIDENTS.

AND STILL MORE MP's support for our call for the £400 energy grant.  Please see Dr Ben Spencer MP's letter to the Chancellor on the link below. 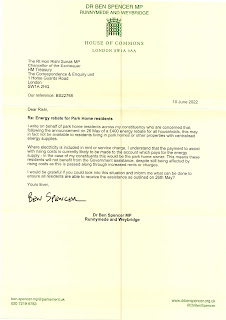